In June I received an email regarding a competition known as Biotechnology YES. I deleted it. It wasn’t until the reminder came out alongside a ‘seriously think about this’ note that I actually opened the link and read what it was about. Biotechnology YES (Young Entrepreneur Scheme) is a University team-based competition in which you present a hypothetical business plan for an imaginary new biotechnology. So after grafting together a group of five, (all Life Sciences PhD students here at Warwick University) we attended the one-day introductory workshop at the University of Nottingham. It was very informative and we had a clear idea of what we needed to do. Our aim: not make complete fools of ourselves and enjoy the experience!

In an attempt to do achieve this we began some prep and met a total of six times before the workshop. The hardest part of it all was generating ideas, any ‘good’ ideas we had had already been done. Did you know there is lawn grass which stops growing before it requires mowing? Or that there are trees which produce more than one type of fruit? Or that bioluminescent lights exist in the shape of dinosaurs? Nor did we until we googled it… We eventually came up with three novel ideas we felt filled a niche and solved a problem, and began the research on market, finance and science! 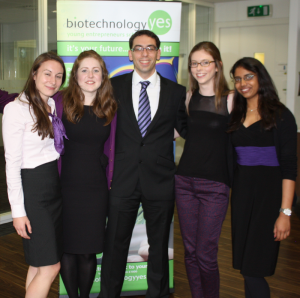 It was easy to pick our best idea once it came down to it. We were going to Syngenta UK headquarters and were given some prerequisites of products that might be sold by a company like this. Our two discarded ideas included a long-lasting sun protection cream (how cool would it be that it lasted your entire holiday?!) and a topical treatment for cats which removes the allergen so many people are susceptible to. The idea which we actually ran with is pretty secret right now, so I’ll tell you after the final ;) But the bottom line is, the actual product or how it works doesn’t really matter, it’s whether you can sell it and how much money you can get back to investors.

The workshop was a fantastic experience as we met many scientists in industry and got a tour of their sprawling grounds. The first two days of the workshop consisted of morning talks on patents, finance and marketing, as well as some inspirational stories from experienced scientific entrepreneurs. The afternoon consisted of meetings with potential investors, scientists, patent lawyers and finance experts. Over these two days, our favourite idea of the three changed four times! But eventually we settled on the product and spent the entirety of Thursday night formulating our business plan.

After a few hours sleep, I was back in the lobby finishing the slides ready for hand in. We didn’t even get to practice the presentation, and it showed when we ran over time and had to miss out the last three slides – oops! TOP TIP for presenting: set a timer!

Once we’d sat back down, it was high-fives all round and a promise to celebrate we had survived a grueling two days and nights. We watched the other teams in our stream present and all agreed that anyone of us could have won, as indeed all the teams had clearly worked very hard.

When our team name was called as winner, my jaw dropped and I blankly stared at my teammates – who were also in this deep state of shock. Turning back to the front the head of R&D at Syngenta whispered ‘get up’ and it was only then that the five of us realized the last two hectic days and sleepless nights had paid off. Our wobbling legs and twitching faces will make for an interesting picture…

This week I am waiting for our personal feedback – but I am certain of the one main reason we managed it. Our team was fantastic. Although we had set roles which we presented (managing, operations, marketing, finance and research & development directors), we all helped each other gather information and held a positive mental attitude throughout. So give it up for my team mates, Nicola Galley, Sarah Smith, Roshani Patel and Stephen Norton, we’re going to the finals in London in December! Let’s go get ‘em!

← How I became a plant cell biologist
We are back! “Power Pack”, the Mitochondria Rock Song →