On working with a Science Club 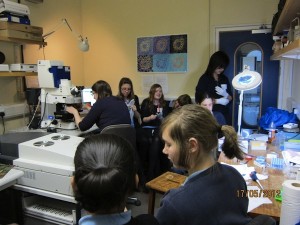 Working together with the Didcot Girls’ School Science Club was one of the best experiences I have had so far in my research career. Their enthusiasm and excitement was infectious and it forced me take a step back and look at my research with different eyes. All of them want to go to university and I am absolutely sure that each of them would be a great scientist if they wanted to pursue that career direction.

The main challenge of the project was that nine students plus one teacher (Vicki) and one technician/HLTA (Lynn) plus one researcher (myself) take up space – physically and hearably. Our little group always attracted attention when we were walking through the stairwells and corridors. So I wanted to make sure to not disturb my colleagues. The solution was to establish one room as a base for everyone, which was either the microscopy room or a boardroom. Vicki and Lynn stayed behind with the bulk of the students and I took small groups of three into the labs to carry out experiments. 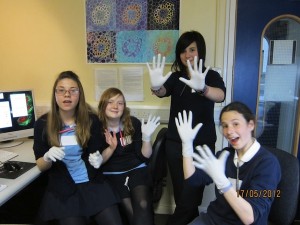 I am studying tethering factors at the plant Golgi apparatus. These are proteins which can “grab” and keep hold of other things in the cell, such as transport carriers or membrane structures. I am working on several candidate proteins and so I picked one of them for the students to work on. All experiments they did were real experiments: things I had not looked at before and this made it not only exciting for them but also exciting and useful for me. There is no reason why outreach projects should not benefit your research as well as the people you are engaging!

I would love to say that I was so organised that I had planned every detail far in advance. The truth is that, like every other researcher, I have dozens of things going on at the same time and a lot of them are higher priority. So while I had a good idea of what I wanted the students to learn during their visits, I was making many details up as we went along. For example I put together some materials like worksheets or basic presentations the evening before. I think that this is probably the way most academics work nowadays. A little creativity goes a long way, and there are plenty of free teaching resources available online which you can draw on and incorporate.

What worked especially well was that the students dived into the theory of the project at school in their Science Club sessions. This meant that they already had learnt some of the basic facts about the Golgi apparatus and the endoplasmic reticulum when they first arrived (they had not covered any cell biology as part of their curriculum yet). They were also able to deepen their knowledge, have discussions or enter data into Excel in that additional time and write blog posts about their experiences (read them all here). Therefore we could concentrate on the practical parts at Oxford Brookes. 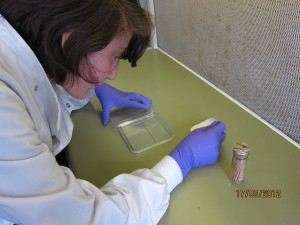 We decided that it would be nice for everyone to have lunch together before we started with the research and we did that throughout the whole project. To break the ice and to allow everyone to get to know each other better, I played a little question game, which I blogged about here (“The Question Game“). I handed out little pieces of paper and asked everyone to write any questions about myself, my research, science or anything else and throw it in the middle of the table. Then I answered them all. This format also worked very well in our CSI:Oxfordshire workshops where nobody had a question when we asked, but we got loads of questions on Post-Its which we collected in a beaker.

After an induction the students were allowed to play with the laser scanning microscopes and looked at transgenic arabisopsis plants with fluorescently labelled Golgi bodies and endoplasmic reticulum. I took small groups into the lab and showed them how to put out wild type arabidopsis seeds on agar with sterile cocktail sticks. We put out duplicates of these plates. One set stayed in our controlled growth room and was grown vertically. The girls took the other set back to their school and grew the seeds in variable conditions (in light and rotated every two days, two days in a cupboard and then in light etc). 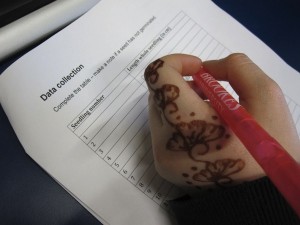 The students returned and brought their wild type plates with them. After they left I had put out a number of mutant lines. This meant that we had a full set of wild type and mutant plants to compare. For this visit I had designed a “Science Circuit”. Station 1 was called “Plant Part Party” and the task was to look at different parts of the transgenic arabidopsis and compare expression of the fluroescent markers and cell morphology. I had also printed a labelled diagram of a plant as guide. Station 2 was “Golgi goes Hollywood” and the challenge was to take movies of Golgi bodies moving through the cell.

Station 3 took place in a separate room with three computers and the task was to measure the seedling length from scans of the wild type and mutant plates. ImageJ is a free software which everyone can download and use to measure anything you like (basic tutorial here). Thinking loudly we came up with grass, eyelashes, teeth, X-ray images of teeth in order to avoid having to pull them before you want to measure them….which makes sense if you think about it. I had designed a basic worksheet with instructions, screenshots and a table with fields to enter the data values they collected, calculate the average and identify the smallest and largest seedling (which started a competition about who would measure the longest one).

This was the last visit where we did research. To prepare for it, I had put out seedlings of mutant lines crossed with fluorescent Golgi/ER lines, which I hadn’t had time to screen yet. To make this session special, I had booked a large boardroom with a computer and projector and brought my netbook as second computer (BABY LAPTOP!). I also provided the big Alberts cell biology book, several research papers and coffee, tea and sugar cubes (SUGAR CUBES!) which were eaten “raw” – sorry, parents! We started by talking about genetics and Gregor Mendel. “Oh, wasn’t he the DUDE that did STUFF…yeah, he was the GUY that did things…” 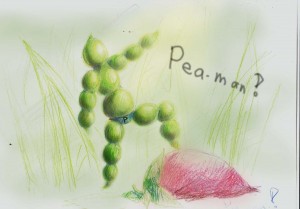 This is how I now will always remember Mendel as – the PEA-MAN! We talked about traits and generations and inheritance and then I took small groups up to the laser scanning microscopes while the rest started to work on their presentation for the Silver CREST award (they had decided to enter the competition for this prestigious award). We looked at the mutant crosses and assessed whether Golgi bodies and the ER looked any differently to the wild type ones we had observed in the last weeks. Excitingly there were a few plants which did look a bit different, so I will carry them forward and bulk up to collect seeds.

Yesterday the students came for their last visit and gave a presentation which was attended by an external assessor and a considerable crowd of researchers from my department. Thanks again a million for your support! It was the girls’ first ever presentation and nerves hit them when they entered the boardroom and saw the 30-40 chairs (OMG!). They did brilliantly and I was very proud of what they had achieved in this short time. It was a sad goodbye and hopefully we will find a way to keep up the link and maybe have an “alumni” visit next year, or I might go to the school and give a career talk.

All in all I think that working with a Science Club is a fantastic way of engaging students and empowering them to go above and beyond all expectations. Because of the additional time available, it allows the students to really dive deep into a research field and the theory behind it. It exposes them to the “real” lab world and a research environment. All posters in the corridors were cool and they were fascinated by the range of research happening in our department, from spiders and butterflies to blood cells or human performance: “Everything is science!”, as one girl exclaimed. All students also emphasised how they are now less scared of going to university. I wish them just the best for their future – as they are all smart, hard-working and confident girls, I have no doubt that they will succeed in whatever they want to do!