Over the last weeks the BBC has aired season 2 of its fantastic mini series “Sherlock” with Benedict Cumberbatch and Martin Freeman. It is fantastic for a number of reasons, but mainly: 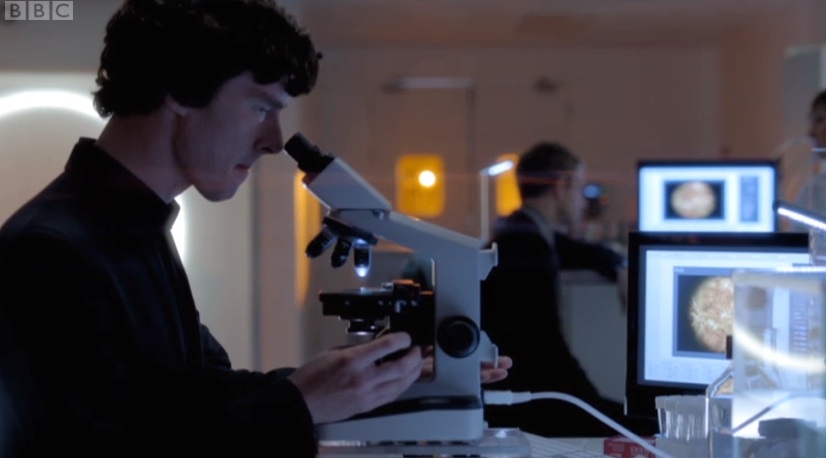 I love that microscopes have a regular appearance, even though in reality the simple light microscope shown couldn’t provide all the results Sherlock obtains from using it. When Sherlock and John made their way into the government research labs and found the scientist with the “glow-in-the-dark” rabbit, who then briefly talked about jellyfish fluorescent proteins, I was bouncing up and down on the sofa and shouting “GFP!!!!”.

So, it’s brilliant that science is incorporated so much into this series but, as in most TV shows, it isn’t a 100% accurate. Therefore I thought I’d write a post with more information about “glow-in-the-dark” rabbits and green fluorescent protein and discuss whether such a rabbit would be possible in reality.

Green fluorescent protein (GFP) is a protein which in nature is sitting at the bell margins of the jellyfish Aequorea victoria. It was isolated by scientists to use it for their research in order to make invisible cellular processes visible. The discovery and improvement of GFP has had such a great impact on biological and medical research that the researchers received the Nobel Prize in Chemistry in 2008 for their work.

Shining ultraviolet (UV) light on GFP makes it give off a bright green light and that is the “glow-in-the-dark” effect for which it has become famous. This phenomenon is also known as fluorescence.

If  biologists want to know where a new protein is located in a cell, we link it to GFP and so create a fluorescent protein. We then deliver this protein into the cells, tissues or organs that we want to study. To make it glow and visualise it, we use fancy microscopes that contain a UV or a laser light source.

Would it be possible to produce fluorescent rabbits? To get the best effect, you would have to create hair which contains GFP.

The part of hair which we can see is called the hair shaft and the part under the skin which produces the shaft is called follicle. Hair follicles go through different phases. The hair shaft only grows in the anagen phase, in which the hair root cells are active. They divide and make the hair shaft, which later hardens as cells die and fill up with keratin.

How can you make fluorescent hair? A few years ago a research group (Saito et al. 2002, PNAS) published a study in which they described a method to produce GFP hair in mice. They introduced GFP into the hair follicle and  from there GFP entered into the growing hair shafts.

Having established that it indeed is scientifically possible to create fluorescent rabbits, we now come to my biggest pet peeve: The liberal and interchangeable use of the term “glow-in-the-dark” and the associated image in which GFP animals glow brightly green as soon as the light is switched off.

In order to make GFP glow brightly, you need to shine UV light on it. If the research lab pictured above had a UV light source, everyone would be required to wear eye protection, as UV light is very harmful. As soon as you turn the light off, GFP will stop glowing. Because of this, Bluebell the GFP rabbit would not suddenly “start to glow” in its dark rabbit hutch unless it had a built-in UV light source.

The pretty “glow-in-the-dark” effect which you might know from children’s star stickers is based on phosphorescence. Phosphorescent materials contain pigments and can glow for minutes or hours in the dark after they have been exposed to bright light. 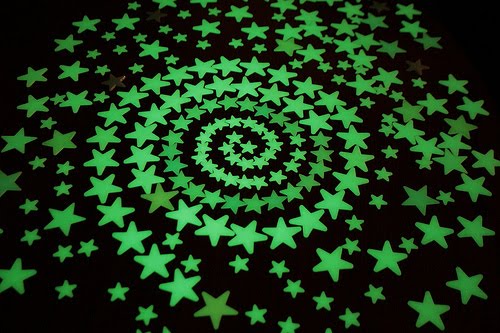 What is the point?

Why would you want to make a fluorescent rabbit? I am not a “hair scientist”, but I can imagine that there is a big  interest in understanding how hair grows and more importantly, how it stops growing and how you could persuade it to grow again (think about hair loss and the huge industry associated with hair loss treatments).

Some companies have started to make and sell novelty “glow-in-the-dark” pets, such as fish or mice. However, you will now know that these animals will only glow brightly when kept under a special UV light (even though the FAQ of NeonMice states that normal fluorescent and incandescent light bulbs give off blue spectrum and so the animals will glow to “some degree under normal light”). I will leave it up to you to make up your own mind about the point of fluorescent pets!

← Apoptosis as you have never seen it before
Faces of Plant Cell Biology: Prof Pat Heslop-Harrison →

3 comments for “The Science of “Sherlock””