On the 25th and 26th May the annual Science Communication Conference, organised by the British Science Association, took place in London. I was able to attend after receiving a bursary from the BSA and came home very inspired and motivated.

One of my favourite sessions was the one about scientific games. Kim Blake from Blitz Games and Martha Henson from the Wellcome Trust talked about how games can be used to not only entertain but also educate a large audience (although you have to be careful, as labelling a game as educational might be the “Kiss of Death” for it).

Did you know that more money is being spent on games than on films? Gaming is a huge industry and games are played by men and women equally. But did you also know that if you want to become a game developer, maths and physics skills might be much more important than computer skills? The reason for that is that games do not only need to be visually appealing, they need to work! If something hits a wall, it needs to bounce off it or go right through it, depending on its physical properties. If someone touches a door, it needs to open.

Ever thought about creating your own game? You are completely on the right track. By developing a computer game you will also develop a lot of important skills like problem analysis and solving, critical thinking and creative design. Games are a complex matter, as they need to have a good story or objective, be graphically pleasing and draw in the player. Almost everyone has found themselves become addicted to what first seemed like a very simple concept, only to suddenly realise that a whole afternoon has passed by.

Do you have an idea for a game and thought about giving it a go? Try the free software “Game Maker 8“. It is a good starting point, as it gives you a number of drag-and-drop actions to animate objects and create simple games without the need for a lot of background knowledge.

If you already are a game designer, you might wanna have a look at the “National STEM Video Game Challenge” (unfortunately only open to US students), which features a prize for grade 5-8 middle school game developers.

Martha Henson has put her talk online, which does not only contain general information about the importance of scientific games, but also a number of examples. If you would like to play a scientific game, I have added a few links to the bottom of this post. Enjoy! 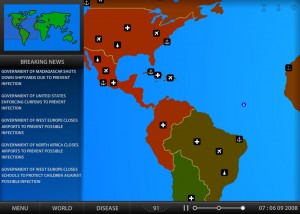 Pandemic II: “The objectives of Pandemic 2 are simple. Evolve your disease intelligently, Spread your disease to everyone, Kill everyone. You are going to want governments as relaxed as possible, to avoid causing a panic. So make sure to keep the visibility of your virus as low as possible. Even if visibility is low, governments are still going to panic if people suddenly start dying everywhere. Pay attention to the news headlines, it can give you insight on developing situations around the world” (more info). 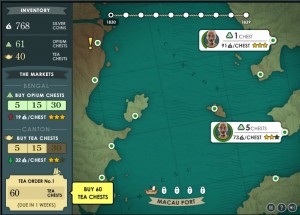 High Tea: “Strategy game based on the British opium trade in the Chinese Pearl Delta that led up to the outbreak of the first Opium War in 1839” (more info). 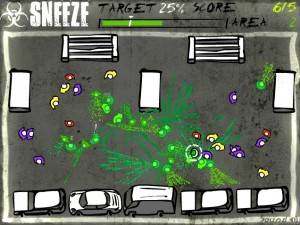 Sneeze: “You are a virus infecting humans. Survive by making your human host sneeze and infect other humans. Infect the target percentage of the population to reach the next round”. 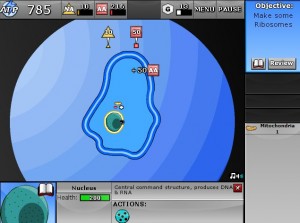 Cell Craft: “Grow a robust cell in order to fight off cold, starvation, and viruses. Can you use your cellular knowledge to grow a super cell and save the Platypus species?”

← Cell Wars
Could we improve discussion at life science conferences? →

6 comments for “Science games – kill everyone and develop important skills!”